Happy Holidays and New Year to you all.

Ricardo and I leave early tomorrow morning on a 10-day road trip to South Africa. We will fly to Joburg, then rent a car and drive the 1500km to Cape Town in time for reveillon, then backtrack to come home by the 3rd.

I'm really looking forward to some time away from my routine and away from Mozambique. I'm going to miss the boys, even the bad one, but I need to get away and renew my energies.

One Bad, One Sweet 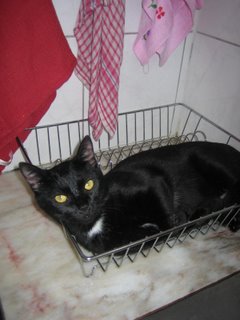 This is the Bad Boy, lounging in the most appropriate spot for a cat - the dish drying rack in the kitchen. The Bad Boy has been particuarly naughty these days. The current tally is one revenge poo and one revenge pee. Can anybody explain to me how a cat that is still technically a kitten can expel over a liter of liquid? 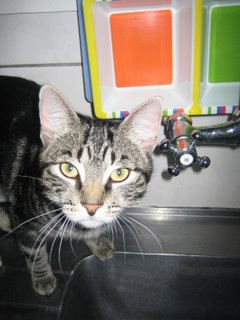 This is the Sweet Boy, who has learned in the last week how to turn on the faucet of the sink so that he can play with the water stream and douse everything in the kitchen in the process. My guess is that the Bad Boy put him up to it. :)

Email ThisBlogThis!Share to TwitterShare to FacebookShare to Pinterest
Labels: maputo, the boys

The Beginning of Forever 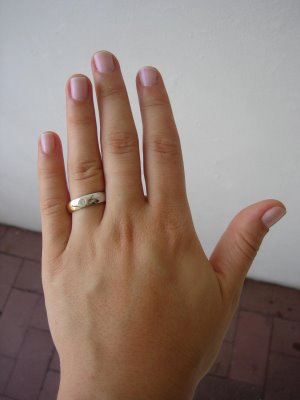 This past Sunday, just hours after arriving in Maputo, Ricardo asked me to marry him. Of course I said yes. :)

Right now we are enjoying our time together and celebrating the big news. I promise details in the next few days.

Hope you all are well!

This week I am feeling slightly less pessimistic. Thank God. Even I couldn't stand my own cynicism last week - it was really bad. Everywhere I looked I saw unsolveable problems, corruption, poverty...the whole 9 yards.

Over the weekend I went out with the girls and had a great time. In the last month I've actually developed a social life so I've been getting out of the house on a regular basis to go dancing, have dinner, hang out and have drinks and listen to live music. We went to a great jazz bar on Friday night called Gil Vicente and enjoyed open mic night. The first act was wonderful - a woman from South Africa singing in Zulu who was full of attitude and had a beautiful soprano voice. This woman and her band, along with the lovely company of my girls, helped me get out of my funk.

Today I am off to do a field visit for the project we are currently doing on horticultural production feasibility in the green zones of Maputo. I must get my things ready for the visit, but wanted to say hello, thanks for your comments, and that despite my absence on your blogs and a general lack of e-mails to friends and family, I am still reading, appreciating and thinking of you all.
Posted by Ali Ambrosio at 12/12/2006 11:13:00 PM 19 comments:

Email ThisBlogThis!Share to TwitterShare to FacebookShare to Pinterest
Labels: i am a consultant, maputo, thoughts on development work

Sometimes I wonder if the persistent cynicism I feel is a sign that my time here in Mozambique should be up. I've dealt with mild pessimism and the notion that my efforts and those of people around me are mostly futile since about my 3rd month in Africa. I think a good dose of cynicism is actually good when you are doing development-type work. It keeps your feet on the ground and helps you from coming down with too much of an I-can-save-the-world complex. However the kind of cynicism I'm experiencing right now is much beyond this healthy dose.

It reminds me of my last months of work directing an HIV prevention program at an NGO back in Austin. My ability to see a positive trend in our efforts had completely disappeared. I was burned out, unmotivated and consumed by the feeling that all of those billions of dollars spent on health education and risk reduction were in vain. The solution seemed relatively simple - get people to use a condom, get people to not share needles, encourage people to get tested, help people to create viable alternatives to selling their bodies for sex, decrease the shame surrounding homosexuality so that men aren't compelled to have anonymous sex through a hole in a bathroom stall, help people start talking about these issues instead of ignoring them and assuming they aren't at risk.

And yet, despite all of the organizations staffed with competent people, despite all of the money and awareness campaigns and celebrity messages, the number of new infections in the US has been steady for the last 10 years at 40,000 new HIV cases per year. I began to realize it was a complex and ultimately uphill battle. In the end, I found it hard to see past the larger statistics and knew it was time for me to move on.

I feel the same way about the situation in Mozambique, and by extension much of Africa. The problems here are also hugely complex - absolute poverty, corruption, disease, famine, lack of education, gender inequalities - yet you'd think with the billions and billions of dollars being thrown at this place, there might be some positive trends by now. I suppose there are when you look at isolated cases - Mozal is a successful aluminium smelter that accounts for a large part of the country's GDP, there have been several interesting microcredit initiatives aimed at providing credit to the poor, the cashew industry is slowly recovering and might regain the pre-independence production levels in a few years. There are also some donor programs that have met their objectives and look quite good on paper or through a quick site visit.

The problem with these success stories, however, is two-fold. On the one hand I don't see these initiatives will be sustainable in the long-run. They are up and running now because there is some foreigner behind the efforts, be it a donor organization, a multi-national company or an individual investor. The impulse to move forward is not coming from Mozambicans for the most part, although most of these programs do involve some sort of training scheme whereby ownership will be transferred to locals after a few years' time.

The second problem is highlighteed by the question "Who is really benefiting from these initiatives?" The more time I spend here and the more experience I have with different projects and programs, the more I believe that the ultimate beneficiaries of development in Mozambique are foreigners and foreign companies. I do understand the "trickle-down" effect, whereby the local population benefits from private-sector economic development. I can see how a factory worker or a miner or a smallscale farmer can earn $100 more per year because of some of these initiatives. However, who is really getting the good deal? I'd argue it's the owner of the cashew processing plant, the multi-national mining company behind Mozal, or even the director of the NGO that is ostensibly "helping people" yet earning a $10,000 per month salary, living in a cushy condominium protected by electric fencing, driving a brand new Land Cruiser and making plans for his next posting in 2 years' time.

The more I really examine my own work here, I realize that my efforts have led to the same conclusions - foreigners getting the overwhelming benefits of development efforts. In the tea factory, the owners are all foreigners. Yes, there is an outgrower scheme to support local farmers, and yes there will be macro-economic benefits for Mozambique, but the real people that will benefit are the company owners. I think about the cotton ginnery we've just received funding for. Same story. The timber project we've got in the works is also the same, with the investors standing to make millions and millions of dollars if the venture is successful.

I understand that the basic idea of private sector development is that the investors should get a return on the money they've put in, that this provides the incentive for efficient and sustainable growth that will in turn lead to progress in the country. I get this, and despite all of the problems, I still do believe that private sector development is the "least bad" solution at this time. All of the others - socialism, state subsidies, donor support from the international community - lead to a cycle of dependence that, in my opinion, undermines any chance of Mozambicans embracing a spirit of sustainable entrepreneurship and development on their own terms. As long as there are handouts with no strings attached other than those that satisfy outsiders' terms and conditions, I am convinced that the problems will go on.

And yet I also firmly believe that the current path we are on will not lead to a positive future for Mozambique. I imagine the country in 10, 20, 30 year's time and see the same inequalities, the same poverty, the same preventable illnesses and lack of education. The only difference is that I see most of the land being owned by foreigners, most of the population working in association with some foreign-owned project or company, and most of the revenues being somehow channeled outside the country. I look at all this and begin to understand how neo-colonialism is a frighteningly real trend in Mozambique...

The more I think about it, the more I am convinced that I do not have a role to play in the development of this country if I truly believe that the driving impulse of economic growth should come from and ultimately benefit Mozambicans. I am just another player in the game, inadvertently contributing to the same end I so love to criticize.
Posted by Ali Ambrosio at 12/05/2006 10:41:00 PM 26 comments:

Email ThisBlogThis!Share to TwitterShare to FacebookShare to Pinterest
Labels: all about la loca, i am a consultant, life in mozambique, thoughts on development work
Newer Posts Older Posts Home
Subscribe to: Posts (Atom)